Jaden McNeil, fresh off of trolling the entire K-State football team, guest co-hosts the Killstream. Twitter was hacked today and it was exposed that they really did have a secret admin panel all along, with shadowbanning, blacklisting, and all the things they once said didn’t exist. Also, Nick Cannon revealed his power level and was forced to apologize, Trump replaced his campaign manager, a website that used to be about trolling doesn’t realize the irony of them incessantly whining about Ralph banging college age women, and Andy Warski talks about true love. 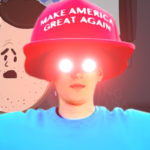